A change is called irreversible if it cannot be changed back again. For example you cannot change a cake back into its ingredients again.

Heating can cause an irreversible change. For example you heat a raw egg to cook it. The cooked egg cannot be changed back to a raw egg again.

Burning is an example of an irreversible change. When you burn wood you get ash and smoke. You cannot change the ash and smoke back to wood again.

A reversible change is a change that can be undone or reversed.

A reversible change might change how a material looks or feels, but it doesn't create new materials.

Melting is an example of a reversible change. For example melted chocolate can be changed back into solid chocolate by cooling.

Boiling, evaporating and condensing are all examples of reversible changes. For example, if you could capture all the steam that is made when a kettle boils, you could turn it back to water by cooling it.
A puddle will evaporate using heat from the Sun on a hot day. 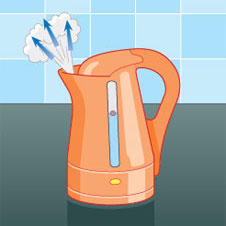 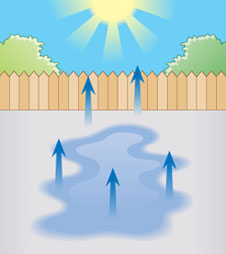 Dissolving is an example of a reversible change. For example, when salt is mixed with water it disappears because it dissolves in the water to make salty water. But we can get the salt can back again by boiling off the water. That leaves the salt behind.


When you mix sugar with water, the sugar dissolves to make a transparent solution. Salt dissolves in water too.Some substances dissolve when you mix them with water. When a substance dissolves, it looks like it disappears. But in fact it has just mixed with the water to make a transparent (see-through) liquid called a solution.
Heat can help some substances dissolve faster in water. Salt, for example, will dissolve quicker in hot water than in cold water.

When you mix sand or flour with water, they do not dissolve.

A mixture made of solid particles of different sizes, for example sand and gravel, can be separated by sieving.

By dissolving salt in water we make a solution. The salt disappears into the water. We can separate the salt from the water by boiling the solution. The water will evaporate until it is all gone. The salt will be left behind.
If we collect the water vapour that evaporates we can cool it to form water again.